CWA to AT&T Board and Investors: Reject Damaging Proposals from Elliott Management

A vulture capitalist fund called Elliott Management, led by billionaire CEO Paul Singer, announced plans last month to extract profits from AT&T by cutting jobs and selling off critical assets while pumping up the stock price with billions in share buybacks. CWA members will need to be ready to fight back against Elliott Management's anti-worker proposals.

CWA President Chris Shelton sent a letter to AT&T's CEO and board this week, and to the company's 100 largest investors, urging them to reject Elliott Management's proposals. CWA's analysis shows no evidence that Elliott's strategies have created long-term value for other companies. Hess and Roadrunner, for example, have both significantly underperformed the S&P 500 since Elliott became involved in similar scenarios.

The effect of Elliott's proposals on AT&T's workers is a primary concern for CWA. In the letter, Shelton noted that CWA has already been tracking job cuts at AT&T, which have been raising concerns about the company's ability to maintain its service quality with a well-trained, highly-skilled workforce. Noting recent strike actions by union members at AT&T, Shelton warned that a new and more aggressive strategy of cutbacks will make it more challenging to avoid further disruptions and to improve AT&T's employee engagement and satisfaction.

Shelton also sent a letter on Monday to members of the Business Roundtable – an organization of CEOs from several major corporations that recently made headlines when they signed an updated Statement on the Purpose of a Corporation recognizing that corporations have a responsibility to workers, customers, and community members, not just shareholders. In addition to AT&T CEO Randall Stephenson and AT&T board member KeyCorp CEO and Chairman Beth E. Mooney who both signed the Statement, six other CEOs who signed the Statement own approximately 16% of AT&T's shares, compared to less than 1% owned by Elliott Management.

"The cost-cutting measures that Elliott recommends, such as closing wireless retail stores and increasing outsourcing, would accelerate the loss of family-supporting jobs and the shift to using low-wage and potentially overseas contractors," wrote Shelton. He further warned Business Roundtable members that Elliott's recommendation to divest its wireline footprint could isolate rural America and that the aggressive stock buybacks proposed by Elliott would suppress investment in crucial initiatives like next generation wireless and fiber broadband networks, including networks for our emergency first responders.

The new agreements provide wage increases of 13.25% over the life of the contracts, pension and 401(k) plan enhancements, improved job security, and additional customer service positions. There will be no increase in the health care cost sharing percentage for the life of the contract and employees will now have the ability to contribute to a Health Savings Account via payroll deduction.

"CWA members in the Southeast were united behind our bargaining team," said CWA District 3 Vice President Richard Honeycutt. "We were able to negotiate substantial improvements to our contracts because our members were truly willing to do whatever it took – including going on strike to protest the Company's unfair labor practices – in order for us to reach a fair agreement." 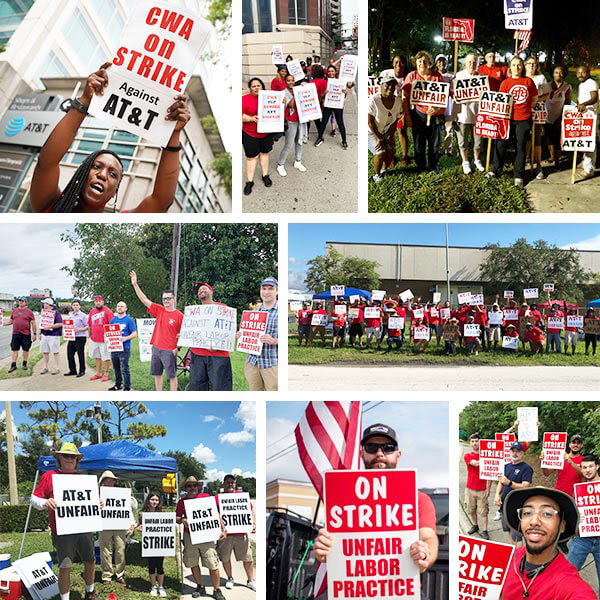 AT&T Southeast CWA members stood strong on the picket lines to reach a fair agreement with the company.

In his joint press conference with Finnish President Sauli Niinistö this week, President Trump mentioned Nokia, calling it a "great company," and making it sound like Nokia is creating U.S. jobs. In reality, while Nokia wants access to lucrative 5G business opportunities in the United States as well as taxpayer-funded government contracts, the company is currently trying to eliminate all of its CWA-represented U.S. telecommunications installers by offshoring good jobs and terminating its highly-skilled U.S. workforce. These actions will cause U.S. workers to lose their jobs and place the health and security of tens of thousands of retirees at risk.

"Trump's comments about Nokia could not be more wrong about what Nokia is doing to U.S. jobs. Trump should listen to the CWA members who've been in bargaining for over a year with Nokia who are urging the company to bargain a fair deal that allows the company to invest in our communities, keep its long-standing installer workforce, and maintain quality of service for customers, and he should tell Nokia to do the right thing for U.S. workers." said CWA Telecommunications & Technologies Vice President Lisa Bolton.

Journalists at the Miami Herald, El Nuevo Herald, and Miami.com announced their intention to join the NewsGuild-CWA. Over the past decade, under the direction of the McClatchy Corporation, hundreds of positions at these media outlets have been eliminated through buyouts, layoffs, and consolidation.

"Local journalism is stronger when journalists feel secure in their work and their jobs," said Julie K. Brown, a Pulitzer Prize finalist and investigative reporter at the Miami Herald responsible for the award-winning series that exposed the Jeffrey Epstein plea deal.

Antonio M. Delgado, a senior reporter with El Nuevo Herald, said, "Given the tough conditions shaping our industry, it is now more important than ever for journalists to organize and face together what has become a very uncertain work environment."

Employees are seeking a stronger voice in the newsroom on issues related to hiring, wages, and leave, as well as editorial and financial decisions that have a daily impact on their lives.

"We call on The Columbian to meet us at the bargaining table to set policies that promote job security, pay that reflects the cost of living and staffing that allows us to tell the stories of our community," the group wrote in a mission statement. "We intend to bargain for equitable wages, greater diversity in the workplace, reasonable leave and health benefits, earned severance, and a fair and consistent grievance policy."

Thirty-four employees at AT&T In Home Solutions in Arkansas gained a voice in the workplace with CWA, with assistance from Campaign Lead Nancy Barrios, a member of CWA Local 6222 in Houston, and Akeyia Johnson from CWA Local 6507 in Little Rock.

Tell Your Member of Congress to Support the PRO Act

When workers stand together to organize, mobilize, and strike we can build power and win the wages, benefits, and working conditions we need and deserve. But that can be extremely difficult when our current laws keep the balance of power tilted in favor of CEOs and the super rich. We need big change.

The Protecting the Right to Organize (PRO) Act (H.R. 2474) is historic legislation that will help put power in the hands of workers and reverse decades of legislation meant to crush unions. It would completely change labor law as we know it and shift power away from CEOs to workers. 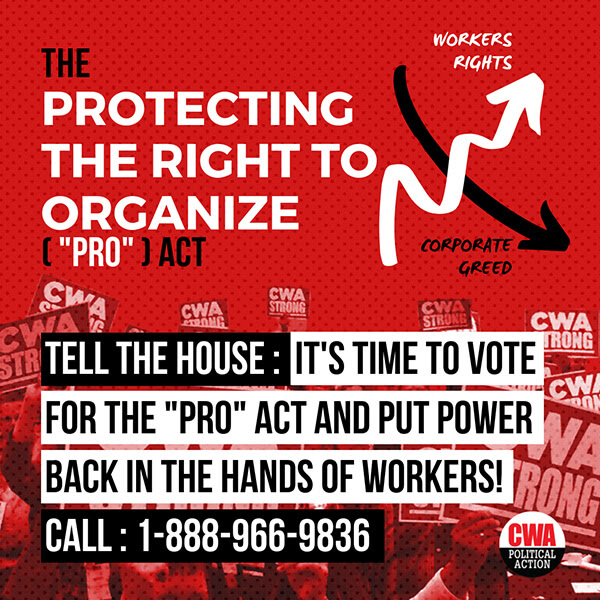 In September, around 70 CWA members from all CWA Districts attended the 2019 CWA/USW Health, Safety, and Environment Conference in Pittsburgh. Members participated in plenary and workshop sessions throughout the week including sessions focusing on how to identify hazards in the workplace and how to get those hazards eliminated or fixed by the employer.

Micki Siegel de Hernández, CWA's Deputy Director of Health and Safety, spoke about CWA's District trainers and local union health and safety activists, who are the heart of CWA's health and safety program. She also spoke about the recent fatality of 24-year-old CWA member Kendrick Hudson at the Charlotte Douglas Airport and about the ways in which CWAers in Local 3645, District 3, and union-wide are fighting for safety improvements to prevent future accidents or tragedies. 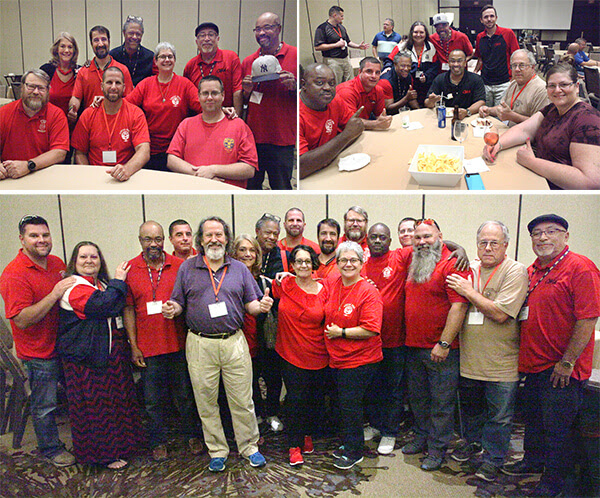 CWA members from all CWA Districts attended the 2019 CWA/USW Health, Safety, and Environment Conference in Pittsburgh, participating in sessions on how to improve member working conditions.

Republican members of the U.S. Senate voted last week to confirm President Trump's new pick for Labor Secretary, Eugene Scalia, who has made a career of representing big corporations in their efforts to dismantle workers' rights. As Labor Secretary, Scalia will have even more power to weaken employment and health and safety protections for workers in order to further enrich already wealthy CEOs and large shareholders. No Democratic Senators supported his nomination.

Shelton vowed that CWA members will fight against the inevitable onslaught of new anti-worker regulation from the Trump administration, and will mobilize to hold Trump and the U.S. Senate accountable in the 2020 elections for "the sick joke of putting Scalia in charge of the federal agency tasked with protecting workers." 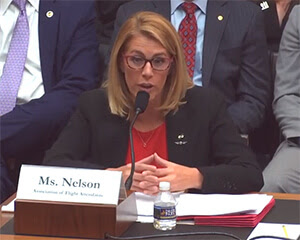 AFA-CWA International President Sara Nelson shared CWA members' perspective at a hearing held by the House Transportation & Infrastructure Subcommittee on Aviation on the implementation of important safety standards to protect Flight Attendants and passenger service agents included in the FAA Reauthorization Act of 2018.

"Flight Attendants are daily experiencing reduced rest and the difficulty of performing our safety and security sensitive duties while fatigued," Nelson told the Committee. "In a May 2019 AFA survey that included nearly 20,000 responses from Flight Attendants at 30 airlines, implementation of the 10 hour irreducible minimum rest continues to be the overwhelming regulatory priority for Flight Attendants. We continue to receive reports of rest reduced to the 8 hour FAA minimum between extremely long duty days. This is a critical issue of safety that needs to be fixed now."

"Passenger service agents continue to experience assault on almost routine basis and have been frustrated by the failure of carriers to prepare for assault situations and especially to develop clear protocols in how to handle assault occurrences," Nelson said. She urged the Committee to exercise its oversight responsibilities and push the FAA to ensure that all airlines are abiding by new requirements directing carriers to develop and implement assault incident protocol.