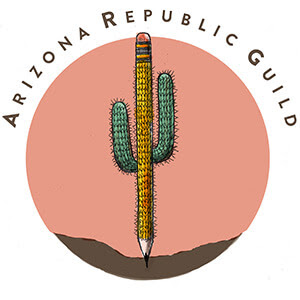 The Arizona Republic Guild's logo was designed by Pulitzer Prize-winning cartoonist Steve Benson, who was laid off from the paper in January.

Employees at The Arizona Republic announced Wednesday that they are taking steps to form a union with NewsGuild-CWA to have a seat at the table as a major corporate merger looms, and are requesting voluntary recognition.

On the eve of the employees' announcement, management unleashed a campaign of intimidation and harassment, calling known union supporters into the Human Resources office individually and questioning them about their activities. The HR director seized the work phone of reporter Rebekah Sanders, effectively preventing her from performing her job. The interrogations followed the release of a newsroom-wide email from the executive editor on Friday comparing union supporters to mob bosses and child molesters.

"As a consumer protection reporter, I fight on behalf of readers when businesses treat them badly. Now, I am fighting on behalf of my coworkers," Sanders said. "I believe the future of local journalism depends on all of us standing up to protect our newspapers."

The announcement comes amid talks that Gannett, the Republic's corporate owner, will merge with GateHouse Media in a $1.4 billion deal, creating one of the largest news conglomerates in the U.S. The companies say they plan to make $300 million in cuts, including more than $100 million to newspaper operations. Gannett has already slashed the Republic by about 70% from roughly 425 journalists in 2008 to about 130 today.

CWAers Build Global Solidarity to Lift Working Conditions for Everyone

A group of CWA call center workers visited the Philippines last week to investigate corporate offshoring practices, expose rampant workers' rights violations in the Philippines by call center outsourcing giant Alorica, and to build global solidarity between workers. As AT&T and other companies have cut thousands of U.S. customer service jobs, they continue to offshore work and rely on overseas contractors like Alorica.

The delegation, led by CWA District 7 Vice President and chair of CWA's Customer Service program Brenda Roberts, met with leaders from the Unified Employees of Alorica (UEA) in Manila in a show of solidarity, and shared their experiences with each other, finding similarities between the ways the companies exploit the workers in the U.S. and in the Philippines. The CWA workers heard about how Filipino workers who participate in union activity are subject to physical threats and severe intimidation. AT&T, which is a major client of Alorica, has done nothing to address the severe union-busting and other rights violations in the Philippines.

Vice President Roberts said the one-on-one conversations with the Filipino workers were energizing. "I'm blown away by the courage of these workers who risk being arrested and put in jail, and yet they know that if we stick together that we are going to make progress and things will change," Roberts said.

"We have the same struggles, but if we stand together and fight through the struggles together, we all win," said CWA Local 6215 steward Kendra Williams, a fraud analyst at an AT&T call center who has worked for the company for 18 years. "We all have the common goal of fighting against corporate greed. Raising their wages is going to raise ours."

"AT&T is preying on workers here. They're getting paid less than $2 an hour and don't have basic rights," said Natalie Santiago, Executive Vice President of CWA Local 3122 in Miami. "If AT&T and Alorica would respect workers' rights, wages here would go up and AT&T would have to stop slashing U.S. jobs."

The visit took place during the AT&T Southeast unfair labor practice strike, and Alorica workers showed their solidarity with U.S. workers by pledging to monitor calls in case the company attempted to send calls that would have been handled by striking workers to their centers.

"AT&T workers across the globe face many of the same issues, which is why we are in this fight together," said Sarah Prestoza, President of the Unified Employees of Alorica.

The CWA delegation also attended the Uni Global Union conference in Kuala Lumpur, Malaysia. They participated in discussions about how to face the challenges of technological change and learned about organizing victories around the world. The conference featured a video spotlighting Teleperformance workers in the Dominican Republic who won union representation with help from CWA, and telecom workers from 66 countries expressed their support for striking AT&T Southeast workers.

Above: CWA District 7 Vice President and chair of CWA's Customer Service program Brenda Roberts (third from right) led a delegation of CWA members who work at AT&T to Manila to learn more about conditions at AT&T contractor Alorica. They met with Unified Employees of Alorica President Sarah Prestoza (center) and Alorica workers and discussed their shared concerns and ways they could work together to fight corporate greed.

Below: Members of the BPO Industry Employees' Network (BIEN), a network of business process outsourcing employees in the Philippines that is allied with the Unified Employees of Alorica, showed their support for CWA members who were on strike at AT&T Southeast.

This week, a delegation of T-Mobile Workers United members traveled to Seattle to discuss their concerns about the proposed T-Mobile/Sprint merger with employee representatives from the Deutsche Telekom (DT) supervisory board. T-Mobile is owned by DT, and the supervisory board was in Seattle for a meeting with T-Mobile management.

At the meeting, the workers presented a letter addressed to DT CEO Timotheus Höttges calling for commitments from T-Mobile to ensure that the merger would not result in job loss or cuts to wages and commissions, to bring back outsourced jobs from overseas, and to stop management interference with their efforts to join together to form a union.

Mike Godshall, a T-Mobile United local steward and customer service representative at a T-Mobile call center in Wichita, Kan., said, "T-Mobile employees like me are worried about this merger and the impact it will have on our jobs."

At a Labor Day town hall in Seattle attended by the TU workers, former U.S. Secretary of Labor Robert Reich criticized the T-Mobile/Sprint merger when asked about it by a TU member saying, "That T-Mobile/Sprint proposed merger should not ever be allowed to take place. You've got two irresponsible firms, they're virulently anti-union." He encouraged the workers to engage with the employee representatives on the supervisory board.

While in Seattle, the TU workers also visited an AT&T call center to discuss common issues that both T-Mobile and AT&T workers are facing. The TU members learned specific ways a union contract means more power to fight injustice and get respect, and shared with the AT&T Mobility workers how they are using their right to collective action to make their voice heard on important individual and group issues as they work toward union representation in their workplaces.

A delegation of T-Mobile Workers United members traveled to Seattle to discuss their concerns about the proposed T-Mobile/Sprint merger with employee representatives from the Deutsche Telekom (DT) supervisory board.

Over Labor Day weekend, AFA-CWA International President Sara Nelson was interviewed on CBS Sunday Morning by Lesley Stahl on the aviation industry, the labor movement, and the power that working people have when we stand together.

"The rules in this country have been written for Wall Street," Nelson said. "And it's going to stay that way until we force it to go the other way. People need to understand that this is our country, and this is our work, and we should be respected for it, and paid for it."

Call Your Senator Today: It's Time to Overturn Citizens United

Spurred by the Citizens United v. FEC decision nine years ago, the Supreme Court has opened the floodgates for unlimited corporate money to pour into our politics and corrupt our democracy. But Democrats in Congress are fighting back.

On July 30, U.S. Senators Tom Udall (D-N.M.), Chuck Schumer (D-N.Y.), Jeanne Shaheen (D-N.H.), and other Senate Democrats unveiled the Democracy for All Amendment, a constitutional amendment to overturn Citizens United and other disastrous court decisions, help get big money out of politics, and put power back in the hands of the American people.

Call your member of Congress TODAY and urge them to pass the Democracy for All Amendment to overturn Citizens United: (202) 224-3121. 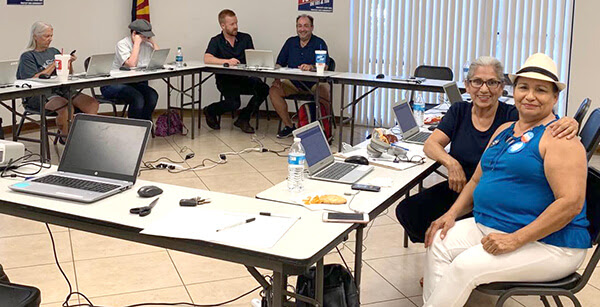 CWA members and retirees in Phoenix joined weekly phone banks along with other labor and community groups to help defeat two citywide ballot initiatives. One of the initiatives would have stopped any new light rail construction and placed a ban in the City Charter on rail-based mass transit, while the other would have frozen any new salary negotiations, new hires, or any new initiatives unless the city public employee pension system reached an astronomical liability percent.

Save the Date for the CWA Customer Service Week of Action

Mark your calendar for CWA's Customer Service Week of Action from October 7-11! This year's Week of Action will focus on supporting MAXIMUS call center workers who are joining together for a voice in the workplace. Keep an eye out for more information on how to take action to support call center worker organizing at MAXIMUS and celebrate CWA customer service members!