This is a volatile political moment. If you saw the debate (and really if you’ve been paying any attention at all), it’s hard to shake the feeling of a profound political decline and crisis facing the United States.

At times like these, it’s important to remember that long-term organizing gets the goods. Elections are important, but at the same time we know that while politicians come and go, building lasting power in the workplace will enable us to improve our lives and impact politics far beyond this election.

The working class has a great wealth of political power to use for the good of society. The 40-hour work week, the National Labor Relations Act, the end of child labor, the first pushes for workplace integration—these and so many more progressive political developments came not from the top, but from great masses of working people organizing from below.

When we, the working class, organize ourselves we have a collective voice so powerful that the politicians and bosses at the top cannot ignore us.

We’re still offering free, online training courses from 10 a.m. to 12 p.m. PT on Saturdays for the next two weeks (and we have more scheduled on weekends after that).

We'll walk you through the 101 of how to start talking to your coworkers and organize your first campaign. Enroll online today!

First, we need to talk about Coinbase. The crypto company’s CEO, Brian Armstrong, wrote in a blog post this week that Coinbase would focus exclusively on profits, forbidding discussion of “causes or political candidates” within the company and telling employees they cannot “take on activism outside of our core mission at work.” Anyone who feels differently, he added, should feel free to leave.

The backlash was immediate. Armstrong was ridiculed online, many rightly pointing out that banning political conversation from the workplace is not only wishful thinking, but patently undemocratic. We also learned that Armstrong’s stance came after Coinbase employees walked out this summer when he refused to say that Black lives matter (he eventually caved).

His stance is anti-worker and anti-free speech. We spend so much of our lives at work, working on projects we love with people we respect. Values are working conditions, which means it’s our task to ensure our workplaces remain welcoming spaces for everyone. We can only do that by being political and engaging with one another.

If you’re an employee at Coinbase, reach out, and if you know anyone who works there, tell them to get in touch.

Welcome to newly unionized U.K. tech workers! Some 30 workers at different tech companies in the U.K., including Google, Amazon, and Microsoft, are the United Tech and Allied Workers, a part of the Communication Workers Union, which represents postal workers. The union effort apparently came from the London chapter of the Tech Workers Coalition and, unlike in the U.S., they won’t have to wait for companies to recognize them before getting union benefits. (VICE)

Lots of tech workers are moving from expensive cities like San Francisco and New York to more affordable homes. Their companies are letting them do it, pushing remote work, but now some workers are facing an unexpected consequence: pay cuts. VMware is cutting salaries by as much as 18% if workers move out of California, and Facebook is going to start pay adjustments in January. (Business Insider)

Workers are WIRED Magazine have walked off the job to protest delays by management to recognize their union contract. Workers have been pushing for union recognition for the past five months, but Condé Nast, the owner of WIRED, has delayed recognition, claiming certain workers shouldn’t be counted in the union effort. (WNY Labor Today)

And if the above weren’t enough, Condé Nast is in hot trouble because of The New Yorker, which it owns, too: AOC and Elizabeth Warren announced they were pulling out of The New Yorker Festival, which they were scheduled to headline, in solidarity with workers at the magazine who are picketing the event to protest management’s delays in recognizing their union contract. Not a great week for the publisher. (The New York Times)

The Feminist Majority Foundation, a non-profit feminist organization that, among other things, publishes Ms. magazine, is reportedly refusing to recognize its workers’ union. And, in a cruel twist of irony, one of the board members of the foundation is famed labor activist Dolores Huerta. You truly cannot make this up. (Jezebel)

And some quick hits:

On October 3, 1961, the United Auto Workers went on strike against Ford in the first company-wide strike Ford had faced since 1941. The auto company was viciously anti-union in the 1930s, but eventually agreed to a union contract (after hired thugs beat union protesters in the “Battle of the Overpass” in 1937), and stability reigned for some 20 years until 1961. Workers then had already agreed to economic terms of their new union contract, but couldn’t agree on workplace conditions: “production standards, the speed of moving assembly lines, the number of Ford-paid union staffers in every plan,” and more.

So 120,00 workers went on strike, and over the next 17 days, different factories held out and kept striking until reaching agreements with Ford one-by-one to address local conditions at individual plants. By October 20, agreements had been reached at all plants.

For decades people in and outside of the labor movement claimed industries like auto manufacturing, steel, and others were simply impossible to organize. The companies were too large, too powerful, too monopolized. They controlled politics, communities, and the lives of millions. But dedicated organizers in the CIO fought to organize these industries, regardless of how difficult everyone else thought it.

We in tech regularly hear that organizing the tech industry is impossible, it’s too hard, the companies are too powerful. Let’s prove them all wrong together.

(Read more at The New York Times, 365 Days of Motoring, and Auto Jumble.) 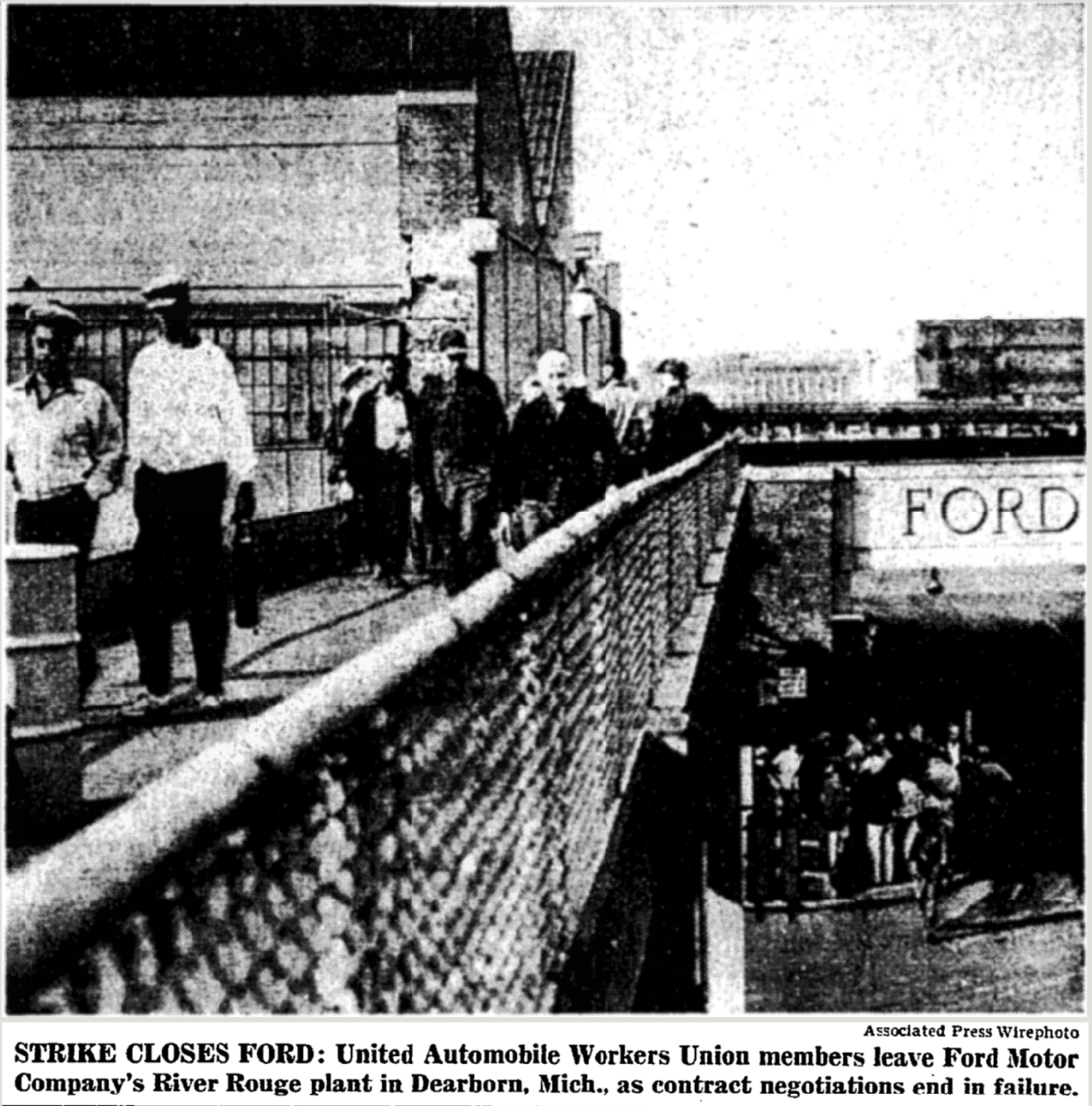 *An English translation of the original lyrics is available in the video description.