As the red mirage faded, we saw clearly the incredible power of working people, particularly working Black people, who cast their ballots to cast out a racist authoritarian.

With margins as tight as they were this election cycle, it is clear the necessary and powerful influence of organizing on every playing field. From the workplace to electoral politics, organizing is necessary in the struggle for justice. Organizing shifts culture, creates community and repudiates systems that do not serve us. Working people took on authoritarianism and won. We are shaping change and pushing towards a more just future.

In spite of historic job loss, a deadly pandemic that disproportionately ravages communities of color and working class communities, uprisings in response to the continued murder of Black people by police, continued nefarious tactics of voter suppression by a leader who flagrantly disregards marginalized communities and has no regard for civil society, voters, particularly the voters who have bourn the brunt of all of these injustices, got out the vote.

The voters who have been given the least gave the most. And that inspires us to keep going. We expect disappointment from the new administration because we are not satisfied with rhetoric about a “return to normalcy”. Normalcy has always been abominable for working people. We’re rejecting normalcy in favor of a joyful future where the very voters who chose to salvage this democracy are given abundance.

Now, more than ever, it is clear what organizing can win us. So, the battle isn’t over and we’re just getting started. 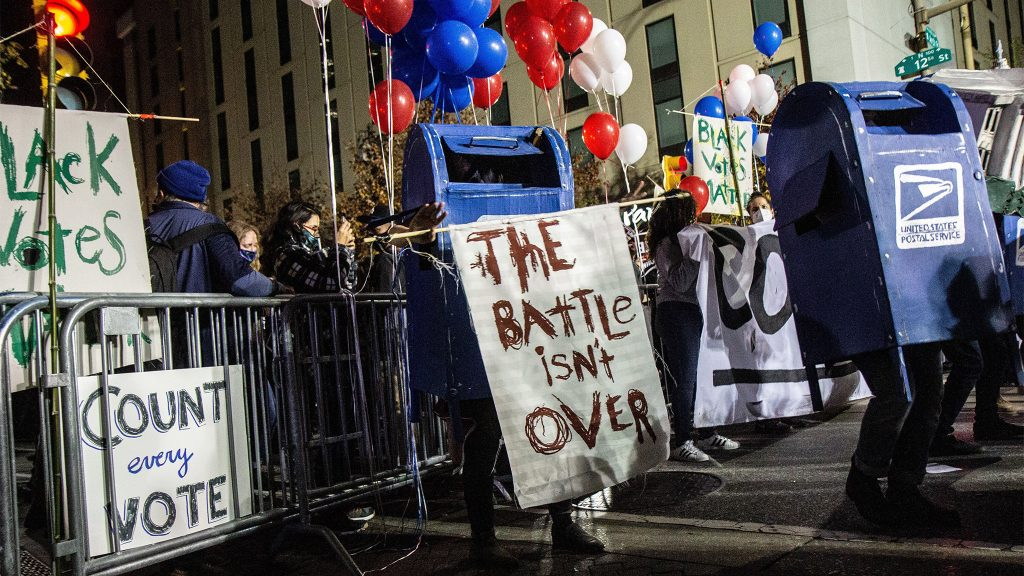 The fight continues to reject normalcy in exchange for shaping systems that empower working people. Workers make the world run and workers should run the world. Organizing our workplaces is an exercise in direct democracy and in leveraging our voices for the collective good of all.

We’ve been offering free, online training courses from 10 a.m. to 12 p.m. PT on Saturdays/Sundays. This week you can join Class 2 in our series with the course “Building the Committee” on November 14. The next introductory course, “Intro to Unions and Organizing” will be held on November 22. Enroll online today!

CODE-CWA can answer questions left movement co-ops might have about healthcare, ownership structure and more due to our experience organizing with worker co-ops. So, interested in organizing your tech co-op? Reach out!

After spending over $200 million dollars on a corporate misinformation campaign, Uber, Lyft and other gig companies have bought themselves a new law– with devastating impacts for drivers and for our democracy. Early exit polling showed that California voters who supported Prop 22, thought they were voting for drivers to receive a living wage. This of course is not the case but an example of the power of corporate spending, especially when these companies have access to both drivers’ and riders’ apps and emails. Following their win on election night, Uber and Lyft were quick to promise rolling out the Prop 22 model nationwide, foretelling a grim future for gig workers across the US and threatening the very benefits, rights and protections workers across industries rely on. Read more from driver and organizer Cherri Murphy who explains the risks facing workers while also inspiring hope to continue the fight at The Guardian.

A new book, Voices from the Valley, reveals that labor exploitation is just one part of the story. Voices in the Valley Tech Workers Talk About What They Do — and How They Do It, looks at the experiences of tech workers, from software engineers to cafeteria workers, and highlights the powerful persistence of worker organizing and resistance. For so long, the tech industry has positioned itself as the answer to all the challenges we face. This positioning is beginning to be shaken as workers bravely stand together, speak out and shape what is to come. Read more at Jacobin Magazine.

Canadian courier union Foodsters United found themselves without an employer when their company, Foodora filed for bankruptcy. In a show of worker ingenuity and resistance, workers are now looking at what worker cooperatives could offer to bypass corporate exploitation. So often food courier apps are seen as unprofitable unless they are exploiting their workers. The Foodsters United union don’t see food delivery apps going anywhere so they are looking at cooperative models that bypass corporate profiteers and use technology to create an equitable industry for workers. Tech co-ops are the future! Read more at Jacobin Magazine.

Union groups in Spotify continue to face push back against their contract negotiation process. Gimlet, Parcast and The Ringer were acquired by Spotify after they had all been officially unionized with the Writers Guild of America, East. However, they have faced evolving managerial tactics to delay “prompt and good faith” contract negotiations. In a statement a union rep said, “If Spotify’s goal is to lead the world of audio, we see this as a really great way to set the standard of what a really good contract looks like in this industry.” Read more at Hot Pod News.

The movement to take on Amazon is global. Digital organizing is playing a key role in strengthening the international labor movement that is growing and pushing Amazon towards higher pay and better working conditions for workers. The goal is that by coordinating demands for wage increases, additional breaks or new safety measures internationally, it wants to force the company into changes for the warehouse workers on whom it depends to deliver the goods. Read more in Politico.

2011 -- The Occupy Wall Street Movement begins with the slogan, “We are the 99%”. Massive job loss, foreclosures and great economic uncertainty set in motion an anti-Wall Street march and demonstration that ended up as a 2-month encampment in Manhattan’s Zuccotti Park. The event led to protests and movements around the world, that focused on economic inequality, corruption, greed and the influence on government of monied interests. While the movement was often the butt of jokes by the media and others in power, it is clear today that the framework born out of Occupy helped set the terrain for the progressive movement today. The Occupy Movement is a reminder of the transformative reverberations possible by every radical movement, even if the outcome is not clear in the moment.

The catchphrase, “We are the 99%” is a great slogan, but the reality is that we, working people, are more like the 99.8%. And the greatest separation between us and the .2% is not their wealth, but ownership. The primary contradiction in society is between workers and those who own the companies, the government, and the means of production. In tech, there are many workers who are wealthy or affluent yet they do not have control over their companies and, ultimately, their labor. Meaning the lack the true ownership power that has been stolen by the .2%. We take power back through unionizing, worker co-ops and other systems that allow working people to be directly in charge of their labor.

Read more about the lasting impacts of the Occupy Movement here.

'Cause I need freedom, too

I break chains all by myself

'Cause a winner don't quit on themselves