Get organizing tips of the month, news, and information for upcoming events.

Hello! We’ve made it through another week in quarantine.

First off, we want to express solidarity with the drivers at Uber and Lyft in California this week. This week the companies threatened to pull out of the state in protest rather than follow labor laws that require them to provide drivers with benefits. It’s scary to have your livelihood in question in the middle of a pandemic.

We’re so inspired by the workers keeping their heads up during this challenging time and fighting for the benefits they are legally entitled to rather than the scraps their companies are offering. As always, we’ve got your back here at CODE-CWA.

Do you need help getting started with organizing at your company? Get in touch, and let’s build together!

New online training dates — CODE-CWA just scheduled two more months of our free, virtual training sessions. Enroll now for an intro to unions and organizing and a tutorial on how to build your first campaign! Registration information is online here.

Black August — Next week is the last week of Black August, a month to honor the struggles and resistance of Black people in the United States. Black August began in 1971, when Black panther George Jackson was assassinated by guards at California’s San Quentin Prison in a prison rebellion. In the face of what the New York Times has coined the largest racial justice movement in United States history, the CODE-CWA team is using this month to honor Jackson’s life, fight state repression of the Black liberation movement, and continue our fight towards collective liberation.

When workers get organized, bosses get scared. And we’re certainly scaring bosses! Last week, OneZero reported on a webinar hosted by anti-union law firm Jackson Lewis focused specifically on the organizing we’re doing at CODE-CWA. The goal was to get bosses up to speed on the tactics we’re using to build worker power and “defend” against them. “They’re gonna organize anywhere from video game startups to the largest tech companies in the country,” said the webinar’s host. Heck yes we are! More at OneZero.

On Thursday, Uber and Lyft threatened to pull out of the state of California if they were forced to comply with a law that mandates they provide benefits to their drivers. The companies used this shameful and manipulative tactic to promote their statewide ballot measure, Proposition 22, which would repeal rights for gig workers. At the last minute, a judge granted Uber and Lyft more time to comply with the law, so they didn’t pull out of the state, but the fight against Prop. 22 continues. More at Refinery29.

Last December, grad students at UC Santa Cruz went on strike to negotiate a cost of living increase. This action was risky — it was a “wildcat” strike, meaning the strike took place despite an explicit “no striking” clause in their contract. In response, the university fired dozens of them. Now, after months of outcry, 41 of these students are finally getting their jobs back. This is a historic victory after a hard-fought battle. In February, The University agreed to provide graduate students with a $2,500 housing supplement in addition to their regular wages. The newly reinstated students will also be receiving an additional quarter of funding and an employment guarantee for the upcoming school year. More at Vice.

California is finally cracking down on the rampant wage theft in the fast fashion industry. The garment industry is notorious for their mistreatment of workers – random inspections conducted in 2015 and 2016 by the U.S. Department of Labor found wage violations at 85% of garment shops. Bosses often get away with paying workers less than minimum wage by using complex networks of subcontractors or employing undocumented people. A new bill by California State Senator Maria Elena Durazo would create broad new accountability mechanisms to hold bosses accountable. More at the LA Times.

Former Presidential Candidate Michael Bloomberg promised to keep 500 of his staff members employed through November to “do whatever it takes” to defeat Donald Trump. He broke his promise, and now staffers are being laid off. A group of ex-Bloomberg staffers wrote a letter to the Democratic National Convention Chairman Tom Perez asking that Bloomberg be removed from the speakers lineup at the DNC until he makes good on his promise to pay his staffers, but were ignored by the chairman. More on HuffPost.

As the pandemic has continued, the term “general strike” has started popping up more and more on social media. A general strike is a strike where workers across different industries all commit to a work stoppage at once. In history, general strikes have occurred randomly. In order for general strikes to be a success, a majority of the workforce needs to participate. A prerequisite of this is having a strong, well organized workforce. If you’ve been inspired by recent calls for a general strike on social media, get started now by organizing in your company and industry! More at Teen Vogue.

Organizing Tip of the Month

There’s a rich history in the labor movement. Let’s share that institutional knowledge.

When you’re getting started with organizing a union it can be scary to ask for help, but it pays off big time in the long run.

Reach out to and lean on people who’ve organized their workplace in the past. Wherever you’re organizing, there’s almost definitely a union that’s experienced similar organizing struggles in the past.

As always, CODE-CWA is here to support you! Get in contact with one of our organizers today.

On August 19, 1909, in Spokane, Washington, the first edition of the International Workers of the World (IWW)’s famous Little Red Songbook was published.

The IWW, that’s members are known as the “Wobblies,” is a radical, international labor union that was founded in 1905 around the idea of building “One Big Union” for workers in all industries. Over the past century, songs from the Wobblies’ famous songbook are used to spread the message of labor organizing to this day, the most famous of which is “Solidarity Forever.”

"A pamphlet, no matter how good, is only read once, but a song is learned by heart and repeated over and over,” said Joe Hill, author of “Solidarity Forever” and many of the other anthem’s in the Little Red Songbook.

In 2018, journalist Kim Kelly explored the legacy of the IWW’s music for the Chicago Reader. She found songs like “Solidarity Forever,” “There Is Power in a Union,” and “Which Side Are You On?” to have been used in major movement actions in Chicago to this day. Recently, these songs were used in the Chicago Teachers Union Strike in 2012 and the #NoCopAcademy campaign in 2017.

We’ve also used the IWW’s anthems in our own work at CODE-CWA! “Which Side Are You On?” was the featured song in our July 24th newsletter.

Read more at the Chicago Reader or on Wikipedia. 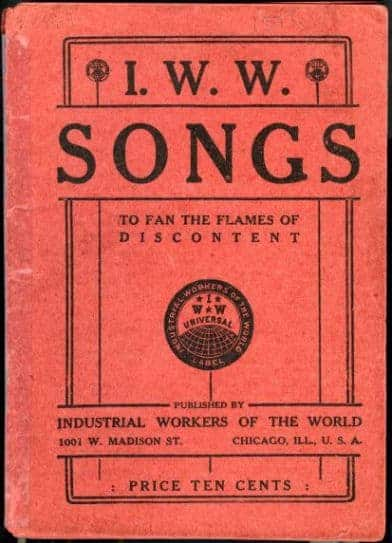 Historical copy of the Little Red Songbook (Voices of Labor)

When the union's inspiration

Through the workers' blood shall run

There can be no power greater

Anywhere beneath the sun

Yet what force on earth is weaker

Than the feeble strength of one?

But the union makes us strong

It is we who plowed the prairies

Built the cities where they trade

Dug the mines and built the workshops

Now we stand outcast and starving

Mid the wonders we have made

But the union makes us strong

They have taken untold millions

That they never toiled to earn

But without our brain and muscle

Not a single wheel can turn

We can break their haughty power

Gain our freedom when we learn

That the union makes us strong

In our hands is placed a power

Greater than their hoarded gold

We can bring to birth a new world

From the ashes of the old